Ozzfest 2010 lineup not as good as advertised.

In case you were dying to know, below is the official lineup for the Ozzfest 2010. Nothing really mindblowing here (besides Halford), but I'm sure it would be a fun concert to go to if you have the cash.

The dates are as follows:

One of the most underrated metal CDs out there is Anthrax's Persistence of Time. It contains some of the most complex and rad songs of the group's career. So awesome! Check out one of my favorite tracks off the album below. 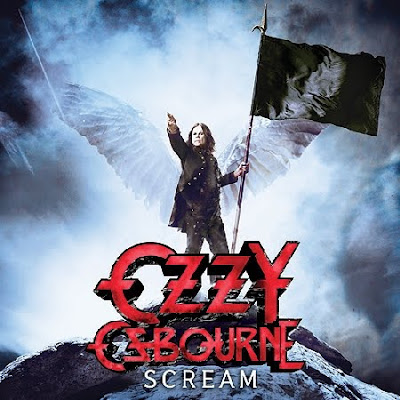 The new Ozzy album went from having a lame album title (Soul Sucka) to an all right one (Scream), but the cover is still pretty damn ridiculous.

I don't know what uncharted land Ozzy is supposed to be claiming, but hopefully the album will be good. Gus G will likely keep things interesting at least.

Cool theme and great video. And that's how I picture Till Lindemann at the end too. The mustache suits him.

Check the video out below. Oh, and if you haven't listened to Liebe Ist Für Alle Da, do it! It's actually pretty damn good.

Metal For Your Brain: Brain Drill's "Beyond Bludgeoned" Music Video

Not much to add here, other than that this new Brain Drill track is melting my brain! Sure I may feel a bit bludgeoned by the tech death genre itself, but I appreciate interesting music when I hear it.

"Beyond Bludgeoned" comes off Quantum Catastrophe, which is due out on May 11th. 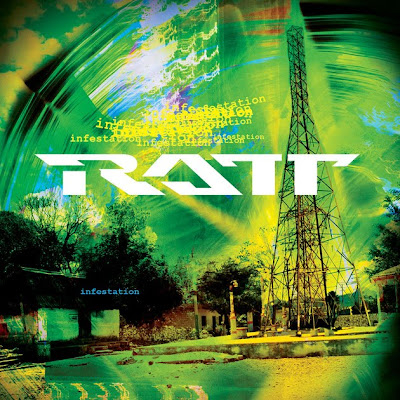 The dialogue from Darren Aronofsky’s 2008 film The Wrestler — where the two main characters are bonding over the RATT song “Round and Round” and a love of the ’80s — is the first thing that came to mind when listening to RATT’s latest album, Infestation.

While not mind-blowing, the CD (released more than 10 years after the 1999 self-titled reunion album) captures the rock ’n’ roll excess exhibited by Mötley Crüe, Def Leppard, Dokken, and even RATT itself, that made the ’80s so cool (albeit with some raspier vocals from founding member Stephen Pearcy and cleaner production).

From the opening metal riffs of “Eat Me Up Alive” to the album’s closer “Don’t Let Go,” there are enough memorable moments on Infestation that it may even surpass the band’s early classics, Out of the Cellar and Invasion of Your Privacy, that helped spawn the hair-metal genre.

Read the FULL REVIEW on The Daily Iowan's website.
Posted by Randy at 12:52 PM 2 comments: 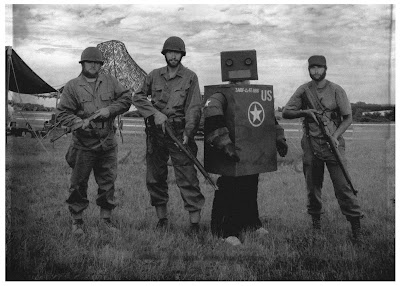 While I won't be partaking in the festivities (outside of the live music itself), it seems like 4/20 is just one of those "unofficial holidays" that screams METAL!

Which is why I am wishing all you loyal readers a Happy 4/20 and, more importantly, informing you of some metal shows going on around Iowa City.

The Mill, 120 E. Burlington, is putting on an event aptly titled "4/20 Fest" featuring music from stoner rock band Snow Demon, the rock juggernaut Superchief and punk-metal hybrid Droids Attack. All of these bands are 100% Metal Show Guaranteed to rock 'n' roll. Best part of it all? Admission is free. Doors open at 9 p.m.

The second metal show on 4/20 takes place at Gabe's, 330 E. Washington, and offers a little more diversity in terms of sound, with the Primus-inspired and bass-heavy Illth, the doomy Dredge and metalcore act Spanish Harlem. Doors for this show open at 8:30 p.m. and the show kicks off at 9:30 p.m. Admission is only $4 for this one.

No matter how you plan on celebrating 4/20, make sure to fit in a little time for some live music and maybe even a trip for some munchies later!

AC/DC Still Got It! 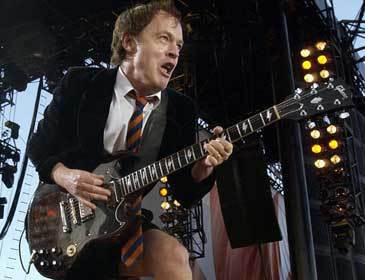 I'll keep this brief, but the AC/DC show on April 17 in Des Moines, Iowa, rocked! I wasn't all that excited going into the arena and the opening band The Last Vegas didn't do much to pump me up, but then AC/DC came out with "Rock 'n' Roll Train" and never let up the rest of the night.

Brian Johnson still has that swagger to him and Angus Young ran around the stage, signature Gibson SG in hand, like a 12-year-old boy hopped up on caffeine. The fact that he can still go crazy on stage for a nearly two-hour set is just insane.

Anyways you can check out the new video for "Highway to Hell" promoting Iron Man 2 below. And that live track doesn't even do the real show justice. 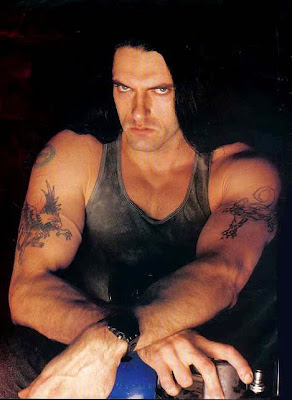 Apparently the rumor of Type O Negative vocalist Peter Steele dying of heart failure may actually be a reality. Like him or not, Steele has one of the most definitive voices out there and wrote some chilling songs.

So, if the rumors are all true, then RIP Peter Steele. Thanks for the tunes. True goth metal at its best.

UPDATE: Looks like Steele's death has been confirmed of what is believed to be heart failure. I figured he must be going through some medical problems, as he has been pretty strong on finding religion and looked weaker as of late.

Here is a great quote on Peter from metal journalist Joe Gausten:

"I met Peter Steele back in 1995, when Jerry and Doyle from the MISFITS brought me along to a show in New York, where they joined TYPE O onstage during an encore. This was the first time those guys has appeared onstage in MISFITS gear in 12 years.

Global Metal: Lamb of God Plays a show in China 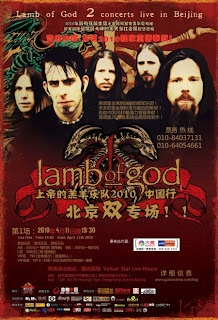 It's kind of cool how music, especially metal, is such a universal language. It is great to see Lamb of God playing this show in China, and I'm sure the fans there dug it too!

UPDATE: Video not working right now. Check it out on Blabbermouth for now.
Posted by Randy at 1:04 PM No comments:

Deftones and the Double Down

So I talked about the KFC Double Down Sandwich on my show last night, but just in case you didn't understand the amazing artery clogging powers of the bunless meat sandwich, it is pictured below. 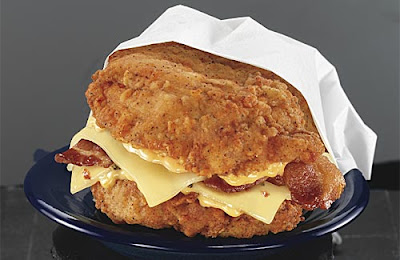 Now onto actual music discussion. The Deftones. Never got into em', but if you are a fan you can check out the latest video for "Diamond Eyes" off the album of the same name due out on May 4. Not too shabby for 90's style metal and strangely refreshing from the metalcore stuff.

Gojira In The Studio: Set to record new EP to save whales.

Word on the street is that Gojira will be heading to the studio this summer to record a five-song EP, with all of the proceeds going to anti-whaling organization Sea Shepherd.

My good friend Eric was able to talk to vocalist / guitarist Joe Duplantier awhile back, and I must say, this guy is legit.

Press release and whale-related song below. And don't forget to check out The Metal Show tonight from 8 to 10 p.m.

Email ThisBlogThis!Share to TwitterShare to FacebookShare to Pinterest
Labels: Ep, Flying Whales, From Mars to Sirius, Gojira, In the Studio, sea shepherd, whales

While I still don't agree Endgame is as good as some people believe it to be, "The Right to Go Insane," is catchier than I remember and a solid choice for a single.

However, it is a little ridiculous to see Dave wearing a bandanna and riding around in a tank, but I imagine he thought it was a good idea.

Check out the music video below.

Slash Solo Album Review: Pick up some Nighttrain and crank the music! 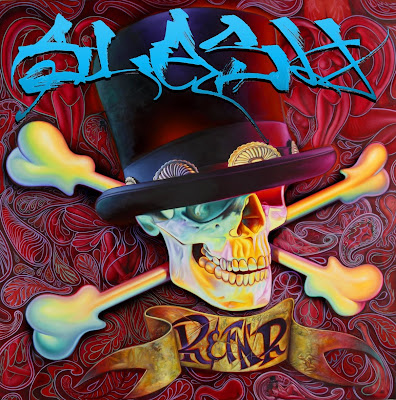 I recently reviewed Slash's new self-titled solo album for The Daily Iowan. Below is an excerpt from the review, as well as a link to the entire article. This is a truly great CD from the former Guns N' Roses guitarist.

"Slash’s curly black hair, top hat, sunglasses, and dangling cigarette are as much a part of the guitarist’s trademark as the riffs on “Sweet Child o’ Mine,” “Welcome to the Jungle,” or any other Guns ’N’ Roses hit.

However, no one can say he has let all the fame get to his head. Slash has always been an honest guitar player, one who relies more on emotion than fancy pyrotechnics. This is part of the reason his playing on the latest solo album, Slash, works so well, perfectly complementing the guest vocalists and musicians he invites to perform over his spicy rock ’n’ roll licks.

Almost every song on the album — from the crunchy opener “Ghost,” featuring the Cult’s Ian Astbury (vocals) and former Guns ’N’ Roses guitarist Izzy Stradlin, to “I Hold On,” which is led by a vocal performance from Kid Rock — flows better than the listener might expect."

Check out the rest of the review on the DI's website.

Oh, and as much as I hate pluggin' The Tonight Show with Jay Leno after he replaced the mighty Conan, here is a recent clip from the late-night talk show of Slash playing the first single off the album, "By the Sword".

(Note: This is one of the less interesting tracks on the album, but it's still cool)

Lack of Updates: Back on Track Soon?

You may have noticed there haven't been any posts since last Monday. Last week was crazy and this week is only going to get more intense (actually the worst of it was today). I will try and update when I can, but also make sure to tune in to The Metal Show from 8 to 9 p.m. tonight if I don't collapse from exhaustion!

Oh and I'll be putting a link to my review of Slash's solo album tomorrow too, so check back for my thoughts on that one.

UPDATE: So I ended up passing out from exhaustion and missing my show on Monday night, ha ha. I didn't actually think it would happen!

My week is still very busy, so I am updating this post with the perfect song for a rough week below... "Pisses Me Off" courtesy of Chris Caffery!