You can check out my previous posts on Cannibal Corpse and Mastodon.

Hell while you're at it, here is a link to the Lamb of God post I made with the link to Set to Fail.

I discovered that doom legends, Candlemass, have also released some previews of songs from the new album Death Magic Doom due out April 3.

Is it just me or are the next 3 months going to make me go even further into debt with CD purchases?

See the album art and player below: 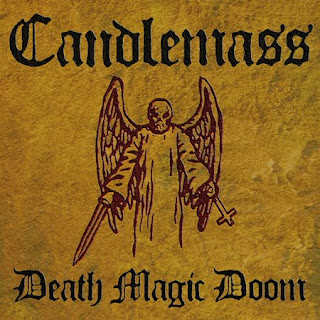 Once again the Web streaming is down on from KRUI. The song log is also down so I am posting a playlist from tonight's show here.

The Metal Show airs every Tuesday from 6-7PM.

Sepultura- Inner Self (Beneath the Remains)
Megadeth- Die Dead Enough (The System Has Failed)
Shadows Fall- Thoughts Without Words (The Art of Balance)
Saxon- Crime of Passion (Into the Labyrinth)
Pantera- You've Gotta Belong to It (Revolution is My Name)
Judas Priest- Deal With the Devil (Angel of Retribution)
Sepultura- Strike (A-Lex)
Faith No More- Midlife Crisis (Angel Dust)
Anthrax- A.I.R. (Spreading the Disease)
Motley Crue- Take Me to the Top (Too Fast For Love)
Obituary- Slowly We Rot (Slowly We Rot)
Metal Church- The Dark (The Dark)
Posted by Randy at 6:44 PM 2 comments:

The Evisceration Plague is Spreading!

Sometimes all it takes is context to make the experience of listening to an album for the first time that much more memorable and appropriate.

I booted up my computer and was browsing the Web, when I thought to check up on my bank account. What I saw when I got to the site was a message which read something like...

"We believe your card has been compromised, expect a new card in the mail in about a week."

At the time I was streaming the first track of the new Cannibal Corpse album Evisceration Plague called Priests of Sodom.

(You too can stream the track via the band's MySpace page.)

The brutality of the music seemed to fit the disbelief and anger that some sort of credit card theft could have happened to me.

But enough about my personal problems... you all want to know how it sounds.

It is definitely Cannibal Corpse, but rather than fast face ripping songs, the band seems to favor a slower more groovin' sound. I'm about halfway through the album now and though a few of the songs are leaning towards the repetitive side, it seems there is enough to keep me listening. I am really digging these grooves!

UPDATE: After a full listen I have determined that Evisceration Plague is a heavy, riff-laden album that is more mature than most of the band's previous work. I will be picking this one up ASAP.

You should go to the MySpace page and check it out for yourself though.

UPDATE: Album's first week sales was upwards of 9,000 copies, charting that band on Billboard at #66! What's more metal than that?

Here is the album cover: 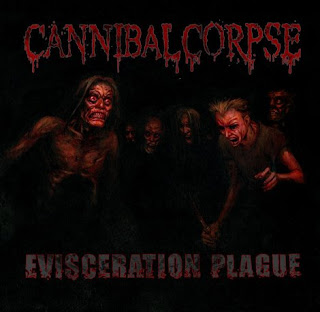 Mastodon is one of those bands that have those little stickers on the CD that makes the band out to be a modern day Rush.

That sticker is the reason that I picked up Leviathan one day in the store. I liked the album, but Rush it was not.

I went back and listened to the band's first album Remission and thought, damn this is shit. Everything is muddy sounding and the vocals on the bonus live tracks are terrible.

Then Blood Mountain came out and it seemed like critics everywhere were raving about what a masterpiece it was. Don't get me wrong, I do think the album is good and really enjoy the song The Wolf is Loose. But I somehow managed to scrap the album after a few listens.

Once again I viewed the live performance and while better, the vocals just aren't quite right still. Nevertheless, the band is getting better and I think that Crack the Skye will be a decent album.

To me Lamb of God, God Forbid and Shadows Fall have all put out more interesting albums in their careers.

The band is going to have to pull out all of the punches to get to Rush status... as if that's even possible!

In fact, maybe the reason I can't back Mastodon as much as others is that I am holding them up to some impossible scale due to a little sticker that was on the CD packaging, probably put on by some PR person.

So, while you shouldn't go expecting the new Mastodon album Crack the Skye to be Permanent Waves II, it will probably still be worth a listen.

Crack the Skye is due out late March. You can check out a clip of the song Oblivion at the band's website. By clip I mean a 35 second piece of music that tells you hardly anything about the album, but they did just renovate that site.

UPDATE: Just got word in, a new song Divinations is going to be released via iTunes and the band's Web site as a single.

Here is the album cover, which I do think is cool. 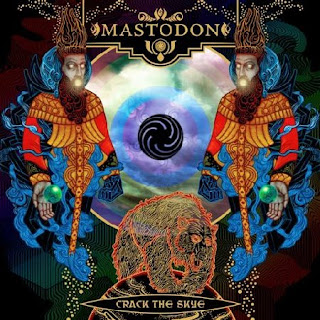 Faith No More Reunion... Not Without Jim Martin.

Faith No More is one of those bands that people usually love or hate.

It seems that often these love/hate bands often write some of the more influential music of our time and Faith No More is no exception.

Mike Patton's vocals can be odd at times, but I now consider the man as one of the best singers out there.

The Real Thing and Angel Dust are both quality CDs that have influenced countless bands over the years. If I had my way, any person owning a music collection would have a copy of The Real Thing.

Countless rumors have been swirling around that the band might one day reunite. Some even said it could happen at the 2009 Coachella music festival in California where Rage Against the Machine first reunited for a show.

This rumor was dispelled, but nevertheless Patton said he wouldn't rule out a reunion of some kind in the future.

I believe that Billy Gould and Mike Bordin would follow suit, but the biggest player that I would want to see in a reunion would be Jim Martin.

Growing up I remember reading a Guitar World article about Martin and how he lived out his days as a pumpkin farmer now, occasionally playing with lesser known bands. His last musical activity appears to be with the punk band Fang from 1998-2000.

Martin was a influential part of Faith No More's sound and was attributed for giving albums, such as The Real Thing, that heavy guitar-driven edge. Some say that he left the band after Angel Dust due to Patton's desire to take the band in a more eclectic direction.

That would make sense seeing as how Angel Dust and future Faith No More albums contain songs ranging in style from jazz to lounge music.

If the reunion does happen, I hope that Jim Martin is a part of it. It's the obvious move, as the band was at its height during the Martin era and that is the era that many fans love the most.

UPDATE: Recently a close source to the band said that Roddy Bottum contacted Martin about possibly doing some shows and he expressed interest. However, the band decided to utilized another guitar player (probably from one of the later albums) if the festival shows do happen. I hope they change their minds about this! Not likely though.

Today the complete track listing for Guitar Hero: Metallica was announced and I was surprised and excited to see all of the songs that made it on there.

It's no secret I am a Metallica fan-boy, but even those that only occasionally enjoy their Metallica should be impressed with the song options.

Here is a sample of what's to come and you can check out the complete song list via Blabbermouth.

Other bands:
+Diamond Head- Am I Evil?
+Judas Priest- Hellbent for Leather
+Mercyful Fate- Evil
+Alice in Chains- No Excuses

Any video game that gets kids into Mercyful Fate, Diamond Head and Samhain is cool in my book.

Even if you haven't played Guitar Hero and put it off as a toy, believe me, it is plenty of fun to play when gathering with friends and a few brews.

Lamb of God Set to Fail?

Lamb of God unleashed another song off of the forthcoming album Wrath. It sounds better than the other song, Contractor, they released a little while ago. It contains what I dare to say may be one of Randy Blythe's catchiest choruses to date. Which in my opinion, isn't a bad thing!

It seems like the band has found its groove again. February 24 couldn't come sooner.

Check it out at the Alternative Press website. (Why it's on that magazine's website I'll never know!)

Also Lamb of God is headlining the No Fear Energy Mayhem Tour with the likes of Children of Bodom, God Forbid, As I Lay Dying and Municipal Waste. Looks like the closest date is in Chicago at the Congress Theater (see concert dates). 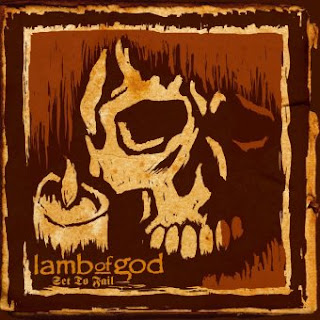 Email ThisBlogThis!Share to TwitterShare to FacebookShare to Pinterest
Labels: Lamb of God, No Fear Energy Mayhem Tour, Set to Fail

The Web streaming and playlist feature were down on the always reliable KRUI Web site...

Remember to tune in to The Metal Show next Tuesday at its new time slot from 6-7PM.

Randy here reporting in after a long break that still ended all too soon...

At least the first day of school can start out right with a brand new Metal Show at its new time-slot every Tuesday from 6-7PM on KRUI 89.7!

Metal continues to takeover KRUI from 7-8PM with Gloves of Metal, followed by Invisible Time Lines from 8-10PM.

Apparently KRUI listened to its fans and decided that metal is indeed alive in well in Iowa City.

Remember you can stream the show via KRUI's website.

Check out the concert updates to the right to see an exciting update. Meshuggah, Cynic and The Faceless will be performing at People's Court in Des Moines, IA. Should be an insane show!

Like what you hear? All of the playing is taken from the album Planetary Duality.