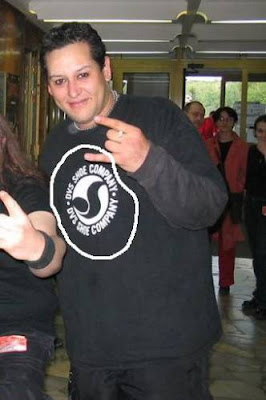 Damn. I came out of graduation to hear that Ronnie James Dio passed away and then as I ended my road trip back from Texas I saw that Slipknot bassist Paul Gray died close to home, in Urbandale, Iowa, yesterday.

This is sad news, whether you like Slipknot or not, and I'm sure this is a rough time for both the members of the band, family and all of the friends the group has made while on the road.

Here's to you Paul Gray. May you also rest in peace alongside James "The Rev" Sullivan, Peter Steele, Ronnie James Dio in Heaven ... or Hell (depending on your preference).

UPDATE: Just caught the end of Slipknot's press conference. The whole band (and Gray's wife) were there and seemed very torn up over the bassist's death. Pretty intense stuff and crazy to see all these guys in a room without masks on such a somber occasion. 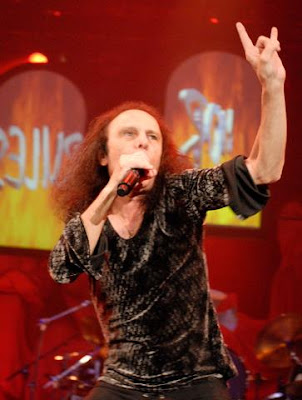 I heard the news of Dio's passing right after my graduation ceremony. Talk about a bittersweet moment. Like I said I am taking a week hiatus from the blog, but not without posting this live clip as a personal tribute to the heavy metal legend! 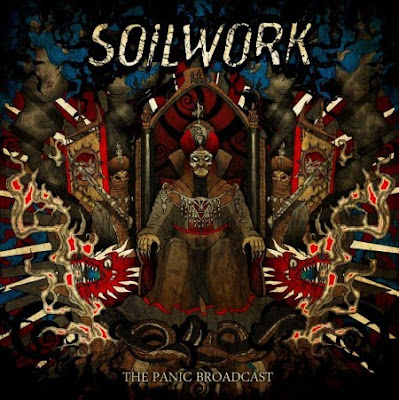 I am going to be taking a week hiatus from the blog to make a road trip to Texas, so sorry for the lack of metal news updates! In the meantime listen to some new Soilwork.

The Panic Broadcast releases in the US on July 13.

Check out a better quality clip of the song on the band's official MySpace, or just hit play below if you're in a hurry.

Email ThisBlogThis!Share to TwitterShare to FacebookShare to Pinterest
Labels: Soilwork, The Panic Broadcast, Two Lives Worth of Reckoning

Yeah, it was my very last finals week at The University of Iowa (which is why I haven't been updating very much) and now it's time for some finals celebration! However, first I'll leave you with a brand new kickass Nevermore tune called "Without Morals". Gotta love that chugging riff at the beginning!

The Obsidian Conspiracy drops on June 8.

Email ThisBlogThis!Share to TwitterShare to FacebookShare to Pinterest
Labels: Nevermore, The Obsidian Conspiracy, Without Morals

I honestly did not have very high expectations for the new Accept album, but after watching the music video for "Teutonic Terror" all I can say is that this is an album to look out for!

Blood of the Nations will be released via Nuclear Blast on Sept. 14 in a record store near you.

Accept | MySpace Music Videos
Posted by Randy at 2:45 AM 1 comment:

While You Were Studying / At Work: A Heavy Metal News Update

I had my first final today of my very last finals week at The University of Iowa (and went on-air for my last edition of The Metal Show earlier tonight) and I now am ready to pass out ... but first I wanted to comment on some of the bigs news of the day in case you missed it. 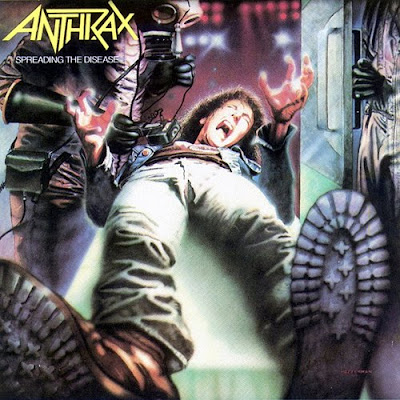 That's right, the crazy-haired metal vocalist with a wide vocal range, that about 50% of Anthrax fans hate and 50% love, is back in the band. Most of the day's talk has been on the topic of Belladonna being the "third choice" for the group and its new album.

If I remember right, it was Belladonna himself that wanted to leave Anthrax after the reunion (although it was probably from the encouragement of Scott Ian and Charlie Benante), so now he is ready to come back because Ian and Benante frankly have no other option.

This means the deal is on Belladonna's terms, which I think works for the band's relationship at this point. This shit is more wild than the Van Halen saga.

Anyways, Belladonna will be joining the band on the Big Four Tour with Metallica, Megadeth and Slayer and is set to begin writing and recording an album for an early 2011 release with the band. Who knows, maybe all that tension will make for a hard-hitting thrash record??? 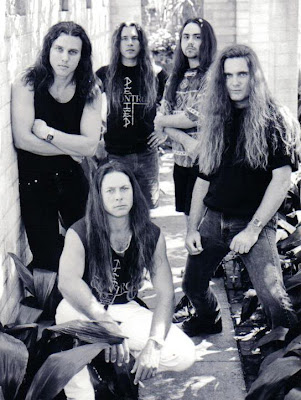 That's right, Relapse Records announced a partnership with Perseverance Holdings Inc. and Chuck Schuldiner's family to reissue digital releases of the older hard-to-find Death albums (such as Spiritual Healing), in addition to the second Control Denied record (Note: as of this time, not sure when these digital releases will be available in US).

Watch a previously unreleased recording of Death's "Crystal Mountain" below: 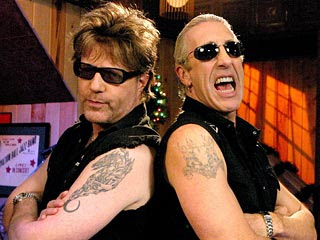 The longtime guitarist revealed this news in a recent interview with Noisecreep. Interesting that a band is finally realizing that nostalgia tours aren't always all they are cracked up to be. Although plenty of bands have proven French wrong as well. 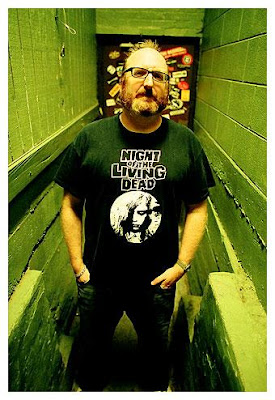 Here's a bit of weekend humor for you, brought to you by metal nerd and comedian Brian Posehn. The first clip "Puppy Time" is pretty damn funny especially towards the end when he compares a puppy to a crazy homeless person: "he'll eat your shoe and shit in your hat." Priceless.

Also posted below, is the "single" "More Metal Than You" from the new album Fart & Wiener Jokes, which is in stores now.

But even more importantly, have a rockin' weekend!

I like to believe that most Pantera fans aren't redneck racists. 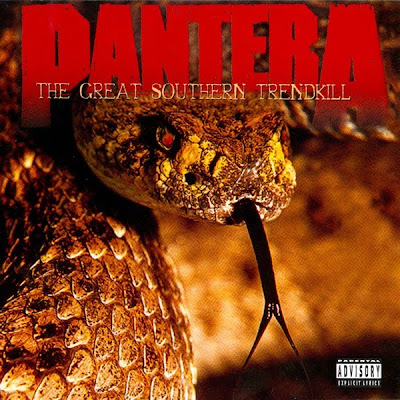 "Here is a bit of Pantera trivia for you. What was the original title of "The Great Southern Trendkill"?

The seemingly innocent question, led to a variety of colorful responses specifically from one individual who used a bunch of racist terms, talks of lynching, and more in an effort to be funny. As big of a Pantera fan as I am, I don't know the official original title of the album (although I think it is simply The Great Southern Trendkillers), but I doubt it involves malt liquor and the n-word.

Don't get me wrong, I think racial humor can serve a purpose as social commentary or even just funny incidents where stereotypes prove to be true. But guessing "Shooting Coons" or "Time for a Good Ol' Lynching" as the album title is not funny. Period.

C'mon America, it's time to set the racism of the past aside. And it's douchebags like this that give the genre a bad name. Anyone can enjoy metal.

Listen to Pantera - "The Great Southern Trendkill" below:

Are you frickin' kidding me?!?: Joey Belladonna rumored to rejoin / perform with Anthrax 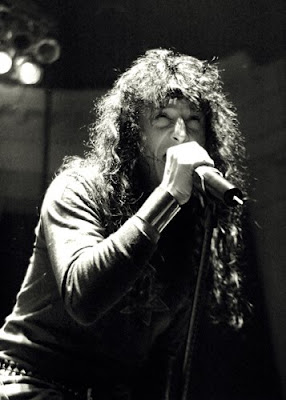 I just read on Blabbermouth that Joey Belladonna is rumored to be playing with Anthrax at the Sonisphere gig and maybe reunite with the band in time for the Big Four Tour.

Here is what was on the Sonisphere website: (translated from Swedish) "Who is singing? Let's say this: His initials are J.B. And he has one goal: a mosh, for everyone."

Note: John Bush and Joey Belladonna both have the same initials, but Belladonna is more associated with moshin'.

This could just be a bunch of BS, but if not, the overly dramatic saga of Anthrax continues. 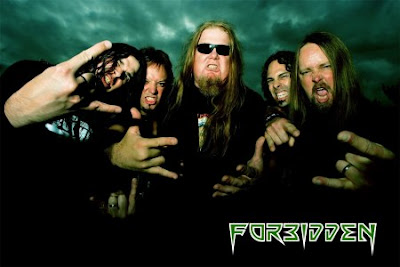 Forbidden just announced the name of its new album, although there still isn't a set release date (it's likely to be sometime in 2010). The name of the disc is Omega Wave, which sounds cool to me.

Also don't forget that Exodus' album, Exhibit B: The Human Condition drops May 18. Not forcing you to go out and buy em', but should be some solid thrash metal from both parties.

On a side note:

I still am not sure about the whole music industry business model. Some of the labels are putting out reasonable packages like the one below, but if you are selling a straight CD with no bonuses no one is going to buy it at $12 or even $10.

The industry needs to find a way to cut costs and get those prices down or it is screwed. Or instead, reward loyal buyers with cool stuff, like T-shirts, or even just posters or other cool things. 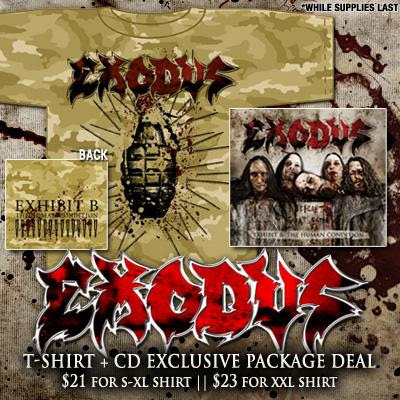 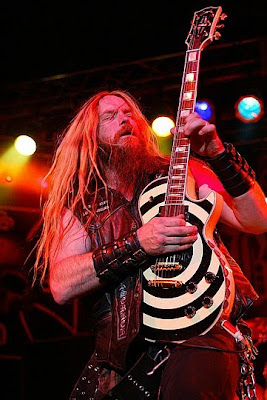 BLS will release it's currently untitled new album on August 10, 2010. The last couple efforts (Mafia, Shot to Hell) had a few notable moments, but failed to capture the brewtality of Sonic Brew, Stronger Than Death and The Blessed Hellride.

Hopefully, now that Wylde has toned down / gotten off the booze binging and is not in Ozzy he will be able to put out another solid album. I still have faith in the man.

Also in other news, Cavalera Conspiracy announced the follow-up to the Cavalera Bros. self-titled original album is recorded and will be released sometime late 2010. That's a pretty fast turnaround, and if the last album is any indicator, this should be some awesome heavy metal.

I look forward to both releases in 2010, alongside stuff like the new Blind Guardian album. Listen to some of the mentioned band's tunes below.