I'm short on time right now, but I think this video speaks for itself. Enjoy! 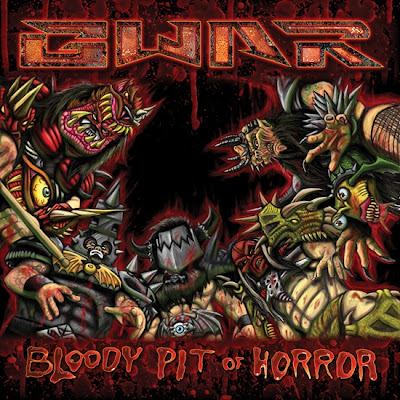 Halford's album Made of Metal hits stores tomorrow, followed by Forbidden Evil's Omega Wave on October 26 and GWAR's Bloody Pit of Horror on November 9. So, while you are deciding which albums to spend your precious dollars on, you can stream a track from each band.

So far, I really enjoyed the GWAR track "Zombies, March" the most of these three bands. It has a classic GWAR-feel, while nailing down a raw production sound, which actually adds to the heaviness of the tune. And it seems fitting for Halloween.

Forbidden Evil isn't bad, but the song is missing a truly distinct riff, whereas Halford's song is pretty straightforward as well, and also failed to hook me into it. Of course, you can't judge an album by one track (as seen with Dimmu Borgir's new album coming out on October 12, which achieves the full-on symphonic sound the band has been trying to reach for awhile now).

Links are below! Enjoy!

CLIFF 'EM ALL: Tribute to a bass legend

Growing up, Cliff 'em All was the first Metallica videotape I owned (had the VHS copy), and it still is my personal favorite. Sure the quality was a little weak at times, but there is something special about seeing the members of your favorite band making a beer run in their youth. And the live performances during the Master of Puppets era, while on tour with Ozzy, were very cool too.

Why bring up Cliff 'em All today? Because it is the anniversary of Cliff's death, in which the metal world lost an inspirational bass player and songwriter. Burton's songwriting contribution to Master of Puppets and the entire metal scene is amazing and will never be forgotten. Cliff may be gone, but his legacy will live on with all the metal greats.

Here's to Cliff jamming out with Ronnie James Dio in Heavy Metal Heaven.

It's late Saturday night, so I'll keep this short. If the single "My Last Attack" is any indicator, Holy Grail's debut full-length, Crisis In Utopia, has the makings to be the best traditional metal album this year (it also looks like the band will tour America alongside Blind Guardian in the Fall).

You can check out the full song below. Crank it up and bang your head! And if you like the track, make sure to support the band and purchase this release.

I have expressed my love of Revocation in the past, but here is another music video in case you missed the three-piece thrash machine in action. The riff at around 2:10 is total win.

Whatever happened to 'Metalocalypse'?

For the fans of Metalocalypse, it seemed pretty damn mysterious when the show suddenly stopped showing new episodes about halfway into what would be a normal television season. This is understandable, as not many cartoon show creators also go on tour between episode writing and songwriting, but at least let us know what's up!

Finally, we can rest easier knowing that Metalocalypse will return this Sunday at 11:30 p.m. Central time (12:30 p.m. Eastern, you might want to double check all of these times), on Comedy Central's Adult Swim.

Let's hope for some solid episodes to close out the forgotten third season, with more to come afterwards.

Alice In Chains' gives fans a video twofer - one bad and one good!

Black Gives Way to Blue is a great Alice in Chains album. However, the new video for "Acid Bubble" is nowhere near as excellent.

The band (or more likely the vid's director) tried to pull together a "groundbreaking interactive video," but instead ended up creating something that is visually boring. You can check out the video minus the interaction below. And the actual version here.

I recommend just cranking the album and avoiding this video altogether.

UPDATE: Turns out Alice in Chains released another music video for "Lesson Learned inbetween the time it took me to make another post! This one is a better video and reminds me strongly of Cantrell's solo album Degradation Trip.

What's in a band name? Rumpelstiltskin Grinder is now The Devil. 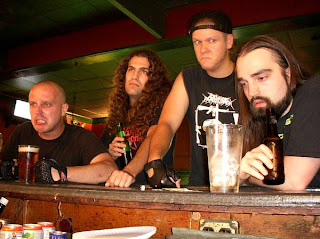 UPDATE: Turns out this all was a hoax. Either the band wanted some attention, or (more likely), someone just wanted to play a practical joke online. My post still stands, but like I said, as long as the band makes cool music, I will keep listening!

Call me judgmental, but there are plenty of times I have held off listening to bands with ridiculous names. I'm not sure what the deal is behind the excellent thrash outfit, Rumpelstiltskin Grinder's name change to The Devil, but I can see why the members would do it (although that name is kind of generic).

While the band's old name may be attention-grabbing to some, it also seems kind of lame. Think about calling a venue when setting up a tour, "I got this band called Rumpelstiltskin Grinder, and it would like to play a show at your venue." Of course there have been plenty of successful bands with ridiculous names to disprove this theory, but I imagine it's harder getting started right out of the gate.

The only weird thing about all this is that the band did have a comedic sort of vibe (the first live album is called Raped by Bears, so I don't even know if this was entirely the band's own decision - could have been lawsuits, other issues entirely).

Either way, if a band like Rumpelstiltskin Grinder wants to change its name to make them more commercially appealing early in its career, then more power to em'! As long as the members keep grinding out awesome thrash, I'll still keep listening.

I haven't busted out Here Waits Thy Doom for awhile now, ever since reviewing it back at my old writing gig (a favorable review I might add), but "Silent Killer" is a strong example of the old school metal sound found on the album. Not my favorite track, but still enjoyable.

The video is about what you would expect from a band like 3 Inches of Blood. Check it out below!

Making music videos is still a useful marketing tool for bands, but only when they back a cool song with some awesome visuals. Danzig's "On a Wicked Night" (off the band's latest release Deth Red Sabaoth) has that classic sound that longtime fans will appreciate - but the video is terrible.

Basically Danzig is standing/sitting by his "tree throne" against a red backdrop with a well endowed woman behind him sort of swaying around. This naturally screams Danzig, but then nothing happens the rest of the video. We get some shots of the band jamming out, close-ups of Glenn, and for some reason the chick later decides to wear a skull mask.

I still dig the song, but I recommend enjoying it without the video (which is why I didn't post it on here). However, if you still want to have a look, check it out at AOL's Noisecreep. 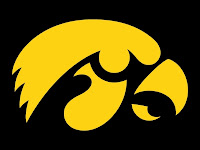 Well it's the weekend once again, and now that the college football season is underway, the days can be full of beers, brats (yeah, that's the German spelling, not brauts), and metal music.

I just watched my own college favorite (Iowa Hawkeyes) pummel Eastern Illinois). But enough about football, you are here for metal. And I'll sum up your end of weekend metal news right here.

That's right, good ol' Halford is back at it again, this time making a legitimate metal album and not some Christmas wreck.

We've already been able to check out one embarrassingly cheesy, yet deliciously heavy, track ("The Mower") from the CD titled Made of Metal, in addition to a live version of the Nascar-ode and title track, and now we can hear the rest on September 28 in the USA (a day earlier for all you European fans and Oct 13 in Japan).

Email ThisBlogThis!Share to TwitterShare to FacebookShare to Pinterest
Labels: All Shall Fall, Autopsy, Halford, Immortal, Made of Metal, The Tomb Within

Separation of Religion and Metal 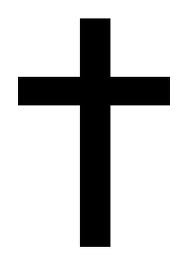 Lately I've been seeing a number of news stories popping up on the various metal sites which feature artists spewing out religious comments or bashing another religion.

Every other day we hear Dave Mustaine give out a Christian rant or __________ (insert black metal band) bashing the blind followers of faith. Just the other day Nergal of Behemoth posted a message to fans while ill, saying that his experience with leukemia would not make him convert to Christianity (which of course it would be stupid to think it would).

And by now most of you have probably heard about Rev Rachel Mann's support of metal music as a release of aggression to make a person more fun-loving and peaceful.

While I respect all of these people's rights to comment on various religions, I almost feel like I'm sick of hearing it all. It's one thing to incorporate these lyrics into your music, but another to send out messages to fans saying how God/Satan/Allah has inspired you to become a better person.

What happened to the days when we could just enjoy music, without all of the religious context? If you are an "anti-Christian" black metal band, bash away in your lyrics, but just entertain when onstage. The whole Bible burning thing is tired now (and disrespectful, as it turns out ironically, there are plenty of pent-up Christian kids that listen to black metal too). And those dead animals onstage are just plain smelly.

Of course there is always the counterpoint in saying that if you take the religion/politics/message out of the music, you're just going to have Motley Crue style metal, but that's not exactly it.

You can still get your views across without alienating your fans offstage and in the live setting. Or at least come up with something a little more original (like Gojira's eco-friendly metal or maybe we can start up some more Mexi-metal and get into the immigration issue...). 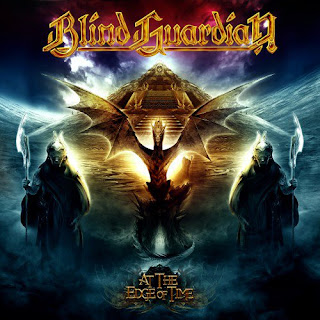 CD Review:
Blind Guardian
At the Edge of Time
8 out of 10

Symphonic metal is a genre bordering between being breathtakingly awesome and incredibly cheesy.

Bands like Therion and Nightwish helped formulate the style of music by combining heavy metal riffs with operatic sounds. Since then, there have been many bands, mainly from Europe and countries outside of the US, who have further explored this genre.

Blind Guardian started out as a straightforward speed metal band in 1984, then added a heavy dose of folk to create a dynamic sound that would be at home within The Lord of the Rings Trilogy.

However, Blind Guardian is one of the few groups that can pull this off without inducing too much cringing, mainly because its members are so damn talented (Hansi Kursch is one of the best touring vocalists out there today).

2002’s A Night at the Opera saw the band taking on a more progressive symphonic direction, which continued on 2006’s A Twist in the Myth and the latest release At the Edge of Time.

The direction wasn’t really a surprise for Blind Guardian’s devout fan base, but every stylistic change comes with criticism.

The good news is, At the Edge of Time successfully combines Blind Guardian’s operatic sound, with its speed metal roots. The songs on the album are at times reminiscent of 1995’s Imaginations From the Otherside and most fit well into the band’s catalog of nine studio albums, although there are still a few issues holding it back from being a truly great album.