It seems fitting to put up a Type O Negative song to celebrate the darkest of holidays, especially since it's the first Halloween since frontman/bassist Peter Steele's death. Rock on and Happy Halloween!

GWAR, zombies, pillow fights, what more could you want in a music video?

Helloween asks 'Are You Metal?"

When Helloween released Unarmed - Best of 25th Anniversary (full of acoustic/symphonic re-recordings of the band's classic songs), I started to lose hope for the upcoming album 7 Sinners.

The whole album was very unnecessary and should have just been packaged as a greatest hits to celebrate the occasion in my mind. Then I heard "Are You Metal?.

This is a monster of a song, full of heavy guitar riffs reminiscent of something found on Dream Theater's "The Glass Prison" mixed with the melodicism you would expect from Andi Deris-era (and most era) Helloween.

It was like the band knew it had to pull out all the stops and deliver a piece of music that could not only satisfy power metal fans, but fans of modern metal as well.

Let's hope the album (set to be released on Halloween, but more likely the Tuesday after the holiday), is equally awesome.

Email ThisBlogThis!Share to TwitterShare to FacebookShare to Pinterest
Labels: 7 Sinners, Are You Metal?, Helloween

I've talked plenty about how much I love Municipal Waste's music in the past. I also love the band's creative low-budget music videos, such as the one recently released for "Wolves of Chernobyl" off the thrashterpiece, Massive Agressive.

Grab a brew, watch the video and have a laugh!

Hail of Bullets new song, "Operation Z" tells of the attack on Pearl Harbor by Japan. It's old school death metal and not bad at all. Check out the video below and if you like the track, On Divine Winds is in stores now.

UPDATE: And here's a double-dose of metal, this one is a video from Triptykon, it's very interesting visually, and the music is good too.

You may have seen the cover of Revolver's latest (and newly named), "The Hottest Chicks in Hard Rock" issue floating around the Internet (apparently there aren't enough "hot chicks" in metal to keep it going).

If not, the magazine features model-turned-hard-rock frontgirl (she's only 17), Taylor Momsen in a steamy Zombie-fightin'-burlesque style outfit. 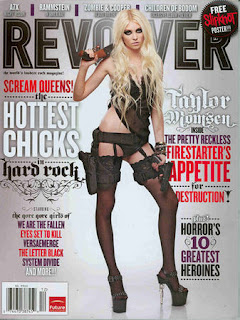 Tons of blogs have already offered commentary on this cover, and I have to agree, Revolver has hit a new low (even if this girl chooses to dress like a stripper and her parents don't care). Sure, Momsen has a right to do what she wants, but at what point did Revolver decide it needed to flaunt a minor on its magazine to sell copies? Couldn't they at least have picked an of-age-spokeswoman?

Valient Thorr is another one of those bands I never really could get into. But this song isn't bad and the video has sort of a Twisted Sister vibe. So I figured I would put it up to help the partying begin on this beautiful Friday.

I also heard the group puts on one big drunken party live, much like AC/DC, but with more booze and members that are hairier/less in shape.

In Flames and Trivium to enter the studio

In Flames and Trivium both recently announced they will be entering the studio to record new material in the next few days/months. In Flames is now at a loss of longtime member Jesper Stromblad (due to recovery from alcoholism) and Trivium has a new drummer, while retaining the other members.

A pair the two bands in this post, because it seems both are faced with creating career defining albums (or at least damn good ones) to remain relevant in today's metal scene.

I've enjoyed the material In Flames has put out as of late (even though I know many old school In Flames fans have not) and look forward to seeing what the guys will come up with next. However, Jesper was kind of the one strand of validity left in the band among old school fans. The band is going to have to pull out the "big guns," to get the longtime fans to take notice. Then again, the newer fans might not even know Jesper is gone...

Email ThisBlogThis!Share to TwitterShare to FacebookShare to Pinterest
Labels: In Flames, Trivium

Sorry about the lack of updates!

You may have noticed I have once again fallen behind on updating the blog. I've been working and applying for other jobs at the same time, which is essentially like having two jobs, on top of trying to keep healthy, work out, and just live life, so I have been slacking here, even though I also love to write, especially about metal!

I have some things bookmarked I would like to make posts about and my goal is to get some new content up by Thursday. Thanks for stopping by and don't forget about the blog!

P.S. Here is a cool new metal video from Dark Fortress to hold you over.